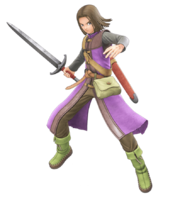 Dragon Quest is a series of games produced by Square Enix and published by Nintendo. It has had a significant effect on the RPG genre as a whole, and been around since 1986. There are 11 main series games, and 39 spin-off games.

How to help
See how you can help contribute to Dragon Quest Wiki! Remember to maintain a standard for grammar and punctuation in your contributions, please.

Register
Register an account to keep track of your contributions.

Main page sections: 1 · 2 · 3 · 4. Changes for the main page can be proposed here.
Retrieved from "https://dragonquest.gamepedia.com/index.php?title=Dragon_Quest_Wiki&oldid=565"
Category: